I’m in the middle of working on a much longer piece right now (the forthcoming epic I was a Teenage Trip Hop DJ), but here’s a smaller chunk about a subject that I think about a lot in regards to music equipment, creative process, and life in general: beginner’s luck. This week, I finally got an Arturia Minibrute after being on the waiting list since April. It’s about as traditional and normal as an analog monosynth goes, with a few thoughtful additions and design idiosyncrasies that justify its addition to a studio setup like mine that’s already drowning in monosynths. I tend to approach synths in a pretty similar way, having worked with them for so long; I have my orthodoxies, habits, and shortcuts to dial up the types of sounds that I want to hear, and this doesn’t change much from one synth to another once you understand how it all works. 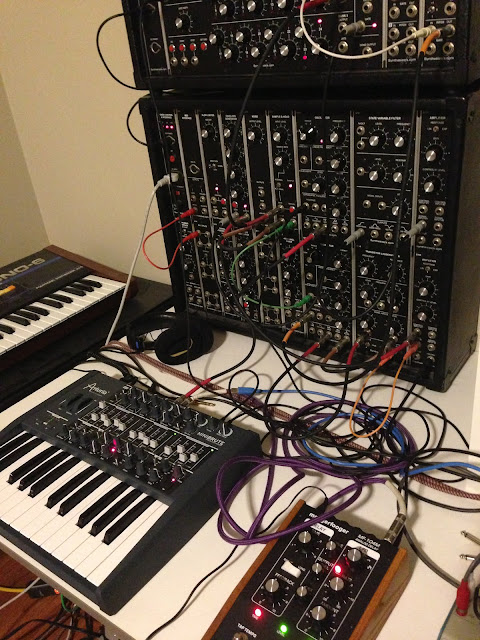 And yet, that first 24 hours (or mercifully longer!) with a new piece of equipment is always completely different than later on, when habits and muscle memory have set in. This is what I love about using new equipment - the weird interstitial learning and acclimation period where all sorts of wacky things seem to just occur by accident and magic. I call this “beginner’s luck” for lack of a better term - you’re still naive enough on the piece of equipment to be “free” in your exploration. You don’t quite yet know what not to do, what parameter to avoid tweaking, so you try it all. You haven’t learned that the oscillator syncing sucks, or that the portamento gets too long too quick, or that the LFO’s irritatingly reset with every retrigger when the arpeggiator is running, or that the pulse wave goes just a little too thin, or that the triangle wave has an extra-buzzy notch in it, that the default key behavior is inexplicably high-note priority, there’s a weird phase relationship in the bandpass filter...you get my point (none of these are in reference to the Minibrute, btw!). You haven’t developed habits in your relationship to the piece of gear, and so you wander and explore and end up in places that I can guarantee you are never going to end up in again later on.

When I first got my Moog Little Phatty - one of the most truly simplified synthesizers on the market - I experienced so many of these happy accidents that I was completely ecstatic. I swear at one point I had somehow dialed up a 3-note chord (the phatty only has two oscillators) that transposed nicely up and down the scale. No idea how, and of course I didn’t save it. I can think of a million other gnarly things I ended up coming up with in those first few days, the happy accidents, the weirdo combinations. But once I learned its basic toolset and got used to its idiosyncrasies, my relationship with the synth got pretty boring; I’d just dial up that “classic” (tired and ubiquitous) Moog bass sound, the big prog rock lead, the growling filter stuff. That’s mostly on me; I got boring in my approach to the synth and allowed myself to just habituate to it. It doesn’t help that it’s not the most unique or inspiring tool in the first place, and I’m also a bit of a pop formalist who’s not trying to sonically reinvent the wheel in my primary music endeavors. But then again, that freedom and weirdness and exploration is what drew me to synths in the first place. We all end up with our creative habits and shortcuts. At best, it becomes our personal style or trademark and at worst, it becomes a rut that we’re stuck in. Everyone has their own techniques for staying fresh and keeping moving, whether it means applying Eno’s Oblique Strategies, imposing concepts on work or drawing restraints on the creative process, or just plain swapping out gear between projects. Ignoring for a moment that using analog synthesizers, sequencers, and primitive effects is inherently its own “oblique strategy” for making songs compared to just picking up a guitar or sitting down at a piano - you’re starting out on third base compared to John Mayer [who still probably gets to third base faster than the rest of us, if you know what I’m saying, hyuk hyuk] - I still go out of my way to work with weirder and inspiring “happy accident” tools like the Roland MC-202 with its “calculator”-style sequencer that inevitably mutates your input into something weirder and funkier than what you intended. And then I always roll tape, especially when I’m just screwing around, just “testing” something, just aimlessly jamming on an idea, just experimenting, and always when I’m exploring or learning a piece of gear for the first time to maybe catch some of that beginner’s luck. I keep a Soundcloud “dumping ground” project for the more interesting stuff that shakes out when I’m not rigidly trying to execute an idea, stick to formalist conventions, completely serve the execution of a verse/chorus/verse song. A friend of mine says he thinks this stuff is more interesting than my “regular” music. Maybe it is. It’s certainly way more effortless, natural, and free in its conception and execution. Cue Ornette Coleman and Sun Ra, I guess.
Posted by Hortonius at 8:57 AM